Shaun Browns Cricket Coaching started in the modest surrounds of Apex Park in the old wire nets he regularly practiced in as a junior growing up in Traralgon. As a local who was playing District cricket in Melbourne he was being asked to "have a look" at cricket techniques of local players. His first personal coaching session took place on September 7, 1986.

The first coaching clinics took place that summer (January 1987) with a group of 28 locals taking advantage of the coaching skills of fellow Hawthorn player John Mitchell at Catterack Cresent Oval in Traralgon.

By 1990 Shaun had taken up a position at an Indoor centre in Melbourne as head coach. More individual coaching was to follow and the cricket camps took a positive turn with the introduction of former Test star Keith Stackpole as the main coach.

By 1991 Shaun Brown's Cricket Coaching was a full time business with coaching sessions numbering in the high hundreds and cricket camps held year round. Ray Bright took on a major role by heading 4 major country camps held at Sale, Traralgon, Albury and Geelong. Keith Stackpole headed the preseason camp with Alan Connolly. Dav Whatmore, Damien Fleming and Darren Berry providing the back up on the summer "Super Clinics".

As Melbourne's first professional public cricket coach the number of coaching sessions increased through the 1990's as did the reach of the cricket camps. Up to 20 country camps were running in the summer holidays, satellite camps were held in outer Melbourne and Super Camps at Carey Grammar and Yarra Valley School had been running for several years. By The mid 1990's Camps were running in Victorian, NSW, Qld and SA.

In 2000 Shaun opened "Clever Cricket" his purpose built cricket centre in Thomastown, coaches were enlisted to help with the coaching workload, Alan Chadwick assisted with the winter coaching sessions and young players Ben Waterman and James Court turned their hand to coaching also. Graham Yallop was a regular on the Winter Warriors and cricket camps were busy in Victoria & New South Wales.

In 2007 due to demand from players overseas the Melbourne International Cricket Academy was created. Students took up placements in at a steady rate in small groups and as individuals. In 2019 we hosted our first inbound tour with the Western Bay of Plenty CA playing 5 games over 10 days.

2015 saw the introduction of SBCC overseas tours with the first to  The United Kingdom ! Where our players train at Lords and play games in England. Tours have expanded to take in Ireland, Wales, Dubai and France! In 2016 we added an u/14 tour to New Zealand which has been a great success also. 2018 saw our first Senior Cricket Tour with a squad of not so young hopefuls joining Merv Hughes on our first ever "Merv's Masters Tour"!

The past 34 years Shaun his team of coaches have taken tens of thousands of personal coaching sessions and coordinate over 1200 cricket camps involving 58 former Test players and in excess of 60,000 keen young players who like us love the game of cricket.

Shaun Brown's Cricket Coaching is looking forward to the next 30 years of cricket coaching in all its diverse forms. Exciting times are ahead. Excellent sponsors in the including Sunnicrust Bakeries, Subway, Platypus and  McDonalds assisted us to grow. Greg Chappell Cricket Centres,FCW and Prime 7 are currently helping us to foster further growth that all began at the local nets in country Victoria in 1986! 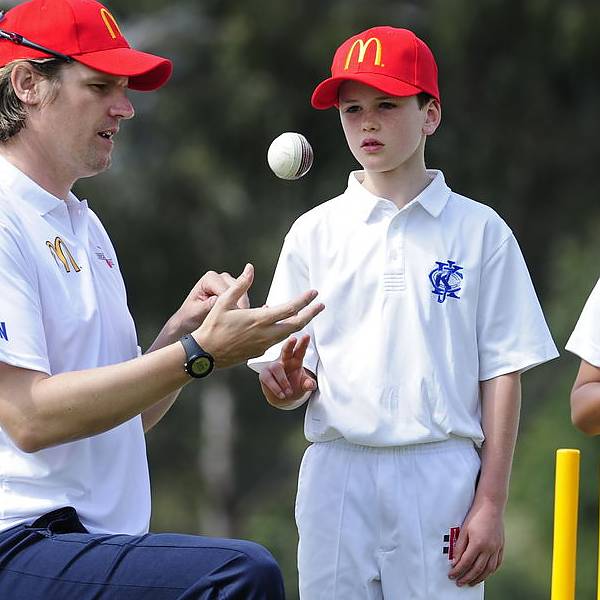